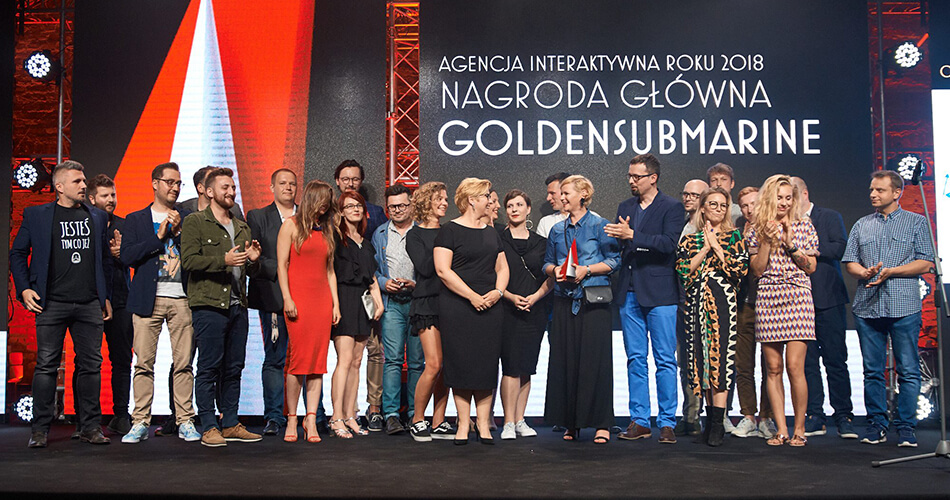 GoldenSubmarine – a Polish agency was awarded with the Interactive Agency of the Year title for the second time in a row. The title granted by the “Media & Marketing Polska” magazine has been given to the agency as many as three times within the last six years.

Below we present the reasoning for the MMP magazine’s choice.

The best agency doesn’t need to be the biggest. And, it is possible to become significantly successful without the support that comes with any agency chain. For many years GoldenSubmarine has been fulfilling business, customer and developmental needs and was recognized in 2013, 2017 and in 2018 and awarded with the Interactive Agency of the Year title.

Within the last two years, the agency doubled their income and can boast a 30% turnover dynamics as well as 35% income dynamics. Such impressive financial outcome mostly results from their expanding portfolio of clients and their growing collection of industry awards.

GoldenSubmarine is continuously developing, and some of the changes they introduced let the agency sustain their high standards regarding customer service and satisfaction. It is reflected in client surveys, which, among other things, contributed to winning the title of the Interactive Agency of the Year for the second time in a row.

Another winning pitch for NIVEA was the most important moment of 2017. For the next three years GoldenSubmarine will be responsible for all NIVEA brands and their categories. The agency builds new strategy and creates nation-wide advertising campaigns directed at internet users, as well as manages the brand’s social media activity. GoldenSubmarine and NIVEA’s cooperation will now also include the BTL activity and marketing automation.

The agency constantly develops their video department which is responsible for creating internet-based video content. They also expand their ATL activities and strengthen their competences in BTL, on the basis on their current clients. Within 12 months GoldenSubmarine garnered 15 awards, 12 distinctions and 35 nominations.

To compile the report and grant the title of Agency of the Year many fundamental factors were taken into account, such as: companies’ financial and business results, a survey conducted amongst their previous clients, and the assessment of the editorial board members who watch the market daily.

Conclusions? Satisfaction with creation and production at the level above the market’s average, understanding the idea of an integrated communication and a good opinion on the market.

Follow us, see showreel and … we hope to see you soon! 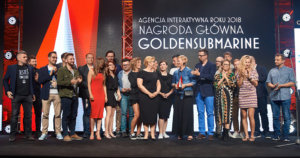